Every spring, around the time the tulips begin pushing up from the dirt and leaves bloom on trees, there is another colorful reminder of the changing seasons: suddenly, every other signpost in town is dotted with fluorescent green and hot pink cardboard signs announcing sales.  For a cheapskate…err, thrifty shopper…like myself, this is a wonderful time of year.  My townhouse is chock full of furnishings that other people have deemed no longer relevant to their lives.  Whatever – I’ll gladly take your slightly used bookshelf for $10.  And I’ll fill it with twenty-five cent paperbacks, too! 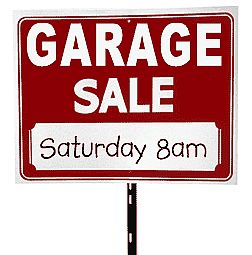 I have noticed that I’ve become a bit of a garage sale snob over the years, believe it or not.  Most people price their goods fairly, but every once in awhile I’ll stumble across somebody who thinks their crockpot with the missing knob is worth eight bucks, or that we should be willing to fork over currency with Abe Lincoln’s head on it for an “Armageddon” DVD that’s really worth a couple of George Washingtons at best (yes, I know that Bruce Willis stars in the film, but he doesn’t play a man named John McClane, so I’ll pass).  I scoff at these people and mutter under my breath things like, what nerve they have, asking $4 for that Mickey Mouse mug with the chipped ear, never mind the fact that I would never in a million years be interested in buying a Mickey Mouse mug, even if both ears were perfectly intact.  I take their price gouging personally, and am actually offended that they think I’m going to line their coffers with any of my hard-earned dough.

Granted, at yard sales, it is perfectly fine to haggle.  In fact, haggling is expected.  But I’m not much of a haggler.  I think I’m just too polite, because when you haggle, you are basically telling the other person that their junk is even junkier than they thought.  It almost seems like you’re insulting them, and I’m too nice for all that.  I have witnessed other people haggling, and the result is always the same.  “Would you take {such and such a price} for this {fill-in-the-blank item}?”  There is invariably a long pause while the seller mulls over the new, lower offer.  Nine times out of ten they agree to the terms, but they always look so crestfallen when they do so.  I just can’t haggle…

…unless  there’s lemonade for sale.  The people who park their kids out front,

turning them into cute, cherubic little entrepreneurs, are the most cutthroat of all.  Who can resist those tiny little faces beaming up at you expectantly and asking if you’d like to buy a cup of lemonade?  It’s warm, after all.  And schlepping back and forth between all those yard sales has no doubt left you feeling parched anyway.  So you fork over a quarter for a cup of shocking pink sugar water and grimace as you swallow it down, the undissolved granules coating the back of your throat and making you thirstier than before.  “Would you like a second cup?”  It’s a real scam they’ve got going on.  John Gotti would be proud.  Like a classic chess match between two otherwise obscure Russian men with impossible-to-pronounce last names, I have already planned my next move well in advance.

“Would you take $2 for this lava lamp?” I ask, knocking a buck off the MSRP.  Long pause, crestfallen look, and an “OK” later, and I have beaten them at their own game.  Checkmate!

On a good day, I’ll hit seven or eight garage sales.  After awhile, though, they all begin to look the same.  At any random yard sale, you are pretty much guaranteed to find at least one of the following items:

Why even bother getting up early on a perfectly good Saturday morning, then, and driving around the neighborhood, pulling up to the curb of some stranger’s house and pawing through the stuff they have decided they can’t stand any longer?  It’s the whole “one man’s trash is another man’s treasure” philosophy.  Every so often, you’ll find something really cool.  Like the food processor I picked up for five dollars, barely used.  Those things retail for over a hundred.  Or Season 1 of Lost on DVD, still in its original shrinkwrap packaging, thirty-five dollars less than what it sells for new.  The deal of a lifetime could be right around the corner, and if I’m sitting around the house wasting my time reading the newspaper or doing something equally silly, I’ll miss out!  I guess you could call it an addiction.

2 thoughts on “One Man’s Trash”