Christmas is approaching way too fast.

People say that every year. Hell, I say that every year. But this year I really mean it. It’s been an odd holiday season because I feel very much in limbo. Tara and I met with a realtor the weekend before last, and after the first of the year, my townhouse will officially be listed for sale. From that point, anything is possible. We could be gone in 30 days. Or we might still be there in 9 months. It’s this great not knowing that is making me more reserved than usual. No outdoor lights this year, but the inside is decorated nicely. Except we don’t have a real tree and there are no lights around the windows. None of those things would affect the sale of our house in the least, but I think it’s more of a mental attitude: don’t go all out, because it’s temporary. I predict that wherever we end up next year, we’ll embrace the spirit of the season much more than we did (are) this year.

One thing I am celebrating with this year is tinsel. For whatever reason, this once-popular Christmas tree accessory has fallen out of favor over the years. Tinsel was invented in Nuremberg, Germany in 1610 and was originally made from extruded strands of silver. Because silver is expensive and tarnishes easily, by the 20th century most tinsel was made from aluminum. Nowadays, it’s generally made from PVC or mylar, and is much lighter than tinsel in the past. It comes from the French word estincele, meaning “sparkle,” and is meant to emulate icicles. I have kept one unopened box I purchased in the 80s, but could never bring myself to use it because I had this unfounded fear that it was the LAST BOX OF TINSEL ON THE PLANET. Last year, my mother-in-law proved otherwise by surprising me with two brand new boxes of tinsel. It was the first thing on the tree this year, and I love it! Maybe I’m just drawn to shiny objects. And despite dire warnings from cat-owning friends – some too graphic to repeat here – there have been no instances of the tinsel and the cat not getting along well.

And while I miss having a real tree, there have been no instances of the cat drinking the water from the tree or knocking it over, so that’s another win-win. Plus, Tara’s scented pine burner really does make the house smell festive. You’d never know it was a fake tree! Well, you’d never know if you were looking at it from all the way across the room, but still. I’ll take it.

Thursday evening was the company Christmas party, and we had a great time raising a ruckus at McMenamin’s Edgefield again. Between the dinner buffet, the free-flowing alcohol, the White Elephant gift exchange, and the billiards after, there was plenty to keep us busy (and inebriated). I ended up with a gift bag that included baby oil, plastic wrap, a bottle of vodka, a Smokey Robinson CD, and a game of Twister. I couldn’t resist stealing it from somebody else and declaring, “Sorry, but we’re newlyweds!” And because I outed myself as an author earlier in the week, I decided to bring along a copy of my book and add that to the gift exchange. All in all a very fun evening, one that lasted until 1 AM before we finally made it back to our room. Tara hit it off with one of our newest employees, Sam. Turns out they’re both country hicks! I’m forever teasing her because she calls a creek a “crick” and the glove compartment a “jockey box.” Honey, we’re in the city now. People are not familiar with those terms. Only Sam was, and suddenly they’re both talking about going “hooky bobbing” while the rest of us are staring at them in confusion. Apparently the term refers to a redneck pastime in which a person will grab onto the rear bumper of a car and hang on while the car is driving over a snowy or icy road. It sounds perfectly safe and legal, no? What could possibly go wrong? 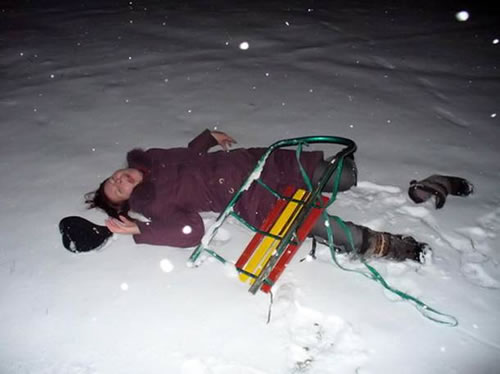 On a related note, the New York Times posted a quiz to test your patterns of dialogue. Based on the words you choose to describe certain objects, and the way you pronounce them, the quiz “predicts” which region of the country you are from. I took it, and learned my speech most resembles those of people in either Reno or Phoenix. Interesting, to say the least. If I were a native Pacific Northwesterner I’d call soda “pop,” but I’m afraid that’s never going to happen.

Anyway, Friday morning we left our complimentary hotel room and drove north to Seattle to celebrate Christmas with Tara’s mom, nephew, etc. They’d had a few inches of snow that morning, and there was still a decent amount left when we got there. Not enough to go hooky bobbing in, unfortunately, but enough to make it feel Christmasy and festive. We had a nice, low-key visit and promised them we’d be there for the actual holiday next year.

I’m back at work today, which feels very strange. After 4 days off, I work one day, then have 2 more off. Work 2 after that, then I’m gone for 9 days.

Hope you all have a safe and merry Christmas!

12 thoughts on “Hooky Bobbing With Sam”