Portland’s unofficial motto is “Keep Portland Weird,” and that’s a reputation the city proudly strives to live up to. Between the chicory-pilfering sous chefs and the battle between the machete-wielding stepdad and the kid who defended himself with a garden rake, there’s plenty of weird to go around. But even I was unprepared for this particular sight a few days ago.

We were driving through one of Portland’s nicer neighborhoods last Saturday on our way to lunch. This area of tree-lined streets and beautiful big houses is called Ladd’s Addition, and is just south of Hawthorne Boulevard, a favorite hangout. I would love to live there. I would also need to have quite a bit of money to live there, so for now it’s a distant dream. Anyway, when we came upon the above sight, we all did double takes. And then parked the car to take pictures.

Now, I’m sure there’s not really a body beneath that dirt piled next to the curb in front of somebody’s house. The owners probably had topsoil delivered for a gardening project, and thought it would be funny to stick a couple of crosses in the dirt.

I’m about 85% sure, anyway. If this were any other city, I’d be positive. But it’s Portland, so you never really know.

This got me thinking about all the weird sights I have seen around town. Fortunately, I have photographic evidence of many of them. So, without further ado, enjoy! 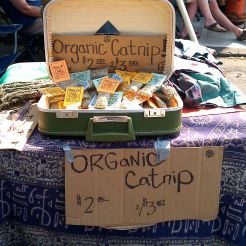 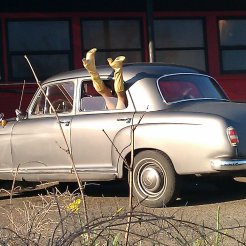 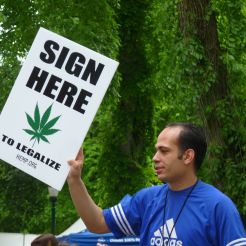 Is your city weird, too? Do you have photographic evidence? And what do you think of the first photo: topsoil for the garden, or a homeowner taking revenge on the guy who always steals his parking spot?