Oops, I did it again.

Subconsciously, I’ve been on a quest to simplify my life. I feel there are too many distractions in the modern world, and they’re getting in the way of the truly important things. Excellent case in point: I love reading, but usually only have time for that before bed. Up until a month ago, whenever I went to bed, I’d grab my phone and catch up on Words With Friends. Twenty minutes later, my eyes would be growing heavy, and I’d find myself too tired to read. Well, that was no bueno, even if I had just nailed a triple word score for 47 points.  The solution? Quit playing WWF. Don’t get me wrong, I love the game – but it was too much of a distraction. So I simplified my life by eliminating it from my daily routine. Now, I have plenty of time to read!

Our life is frittered away by detail. Simplify, simplify.

Simplifying your life, it turns out, is addictive. Thrilled with all the extra reading time, I cut back in other areas. I update Facebook less frequently. I cancelled our series recording for Hell’s Kitchen because, quite frankly, we were only watching it out of habit. Hell, I even stopped showering on a daily basis, because who needs to be clean every single day (and now I’ve got tons of extra time in the mornings)!

OK, I’m kidding about the no-showering part. But when I saw this new theme featured on WordPress, I was intrigued. It’s decidedly less cluttered than my last theme, and puts the focus on the content. It’s actually designed for “longform” writing (that is, people who can’t shut up – like me). It’s definitely a very minimal design: there are no widget areas on the side, no extraneous links, no tagline, no bright colors. You have to click on a funny-looking button on the left to find the About Me section and other pages, and if you scroll all the way to the bottom, there are a few links to archived posts, my blogroll, my book, etc. But I did away with a lot of extras, like the calendar of posts and Instagram pics. Simplicity, remember? I’ll try it out for awhile and see how I like it.

Nature is pleased with simplicity. And nature is no dummy.

In the meantime, let’s talk about soccer! Because everybody else is. It seems that this year’s World Cup has grabbed the attention of Americans like no other. I’ll admit, I have not been immune to soccer fever, either. It helps that my office has a flat screen television mounted to the wall, one that has been tuned to every World Cup match for the past couple of weeks. It also helps that one of Portland’s nicknames is Soccer City, USA. We’ve even got our own Major League Soccer team, the Timbers – and a legion of rowdy fans supporting them. It’s hard not to get caught up in the frenzy.

I first discovered the beauty of soccer eight years ago, during the 2006 World Cup. That was a very challenging summer for me; my first marriage was crumbling, and I needed a distraction. Bored at home one day, I was flipping through the channels and landed on one of the World Cup matches. Brazil vs. Australia. Had you mentioned those countries to me earlier, my mind would have turned to Carnival and koalas, not soccer. 40 minutes in, and the score was tied at zero. How typical, I thought with disdain. No wonder soccer has never caught on in this country. I reached for the remote control, but something stopped me. Namely, the action on the field. I quickly realized the sheer athleticism these players demonstrated, and how exciting the game truly was. Those who deride the lack of scoring are missing the big picture: the gameplay itself. By the end of the match, I was hooked. Even worse, I started calling it futbol, complete with annoying accent. I ended up catching five or six games during that summer. In fact, it was during one of those matches when I told my mom, who had stopped by the house to drop something off,  that I was getting a divorce. For that reason, soccer will always be inextricably linked with change and growth…at least to me.

Four long years went by, but when the World Cup rolled around again in 2010, I found myself every bit as captivated. That was the Year of the Vuvuzela. The next year MLS came to Portland, and I would periodically watch Timbers games. And now, the World Cup has returned once more. Am I still just as entranced by the sport as before? Well, here’s a shot of my desk at work yesterday, during the USA-Belgium match. 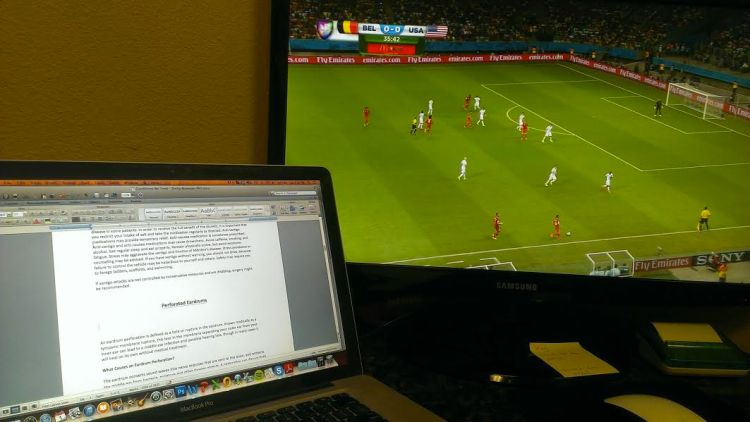 You call that a lack of productivity? I call it multi-tasking. Hell, my boss should reward me for displaying initiative (figuring out how to live stream the game to my second monitor) and a can-do attitude (watching the game while simultaneously working). Best of all? That was the Univision feed. Meaning the entire broadcast was in Spanish. Which I don’t speak a word of. So, I guess you could say I still have more than a passing interest in the game.

Ultimately, the U.S. lost yesterday’s match in overtime, but it was a hard-fought battle full of action and suspense. Great play, guys. Let’s make a real run for the top in 2018.

16 thoughts on “Carnival and Kangaroos”