Friday evening, we stumbled upon one of the most beautiful sunsets we had ever seen.

I say “stumbled upon” because we did not set out in search of a sunset. We’d actually decided to celebrate the end of the work week with dinner at Beaches, on the Columbia River waterfront. We got there a little bit after 6:00, three hours before the sunset. A combination of factors (a few drinks, leisurely conversation) meant we were there until about 8:45. When we left, we decided to stroll along the water. Though the evening was warm and humid, the sky was beautiful. And when we rounded a corner and saw the above sight, it became stunning.

I should point out that this photo is untouched in any way. I am not averse to adding filters and touching up pics. I’ve long said photography is an art form, anyway. But this was one of those instances in which Nature had the final word. There was nothing I could add to this photo to improve it – it’s perfect in all its unadulterated glory.

As I was snapping pics with my phone, a guy walking by started making fun of me. “Ooh,” he said to his girlfriend, “Sky so pretty. Must take picture.” Or something along those lines. It’s a good thing I don’t give a damn anymore, or I might have been irritated. What’s the big deal, anyway? Everybody is snapping pics with their phones nowadays.

Maybe that was his point. 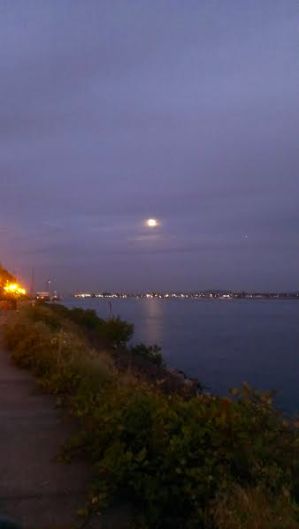 Whatever. The sky was beautiful, and I relished every second of it. As an added bonus, we had a nearly full moon hanging over the eastern horizon.

Saturday evening we headed into Portland for another celebratory dinner, this time at our favorite tapas place, Navarre. We don’t normally go out to eat at nice restaurants two days in a row, but Tara has been working hard and got an unexpected raise last week, so we figured that was a worthy enough excuse. We brought Audrey along, and that was interesting…because this was no mere burger joint. Our dinner consisted of plates of food that could have been plucked from the nearest farm: Duck. Lamb. Rabbit. She had no problem with the first two, but drew a line at the rabbit. No amount of cajoling could get her to budge, either. I raved over the tender braised meat, and the succulent flavor of the vegetables, and the heartiness of the sauce, but all to no avail.

“I can’t eat anything with a cute face!” she replied.

“Not a chance,” she insisted.

And then, as if to prove a point, she whipped out her phone and held the screen up for us to see. “How could you eat this cute little fella?!” she asked. 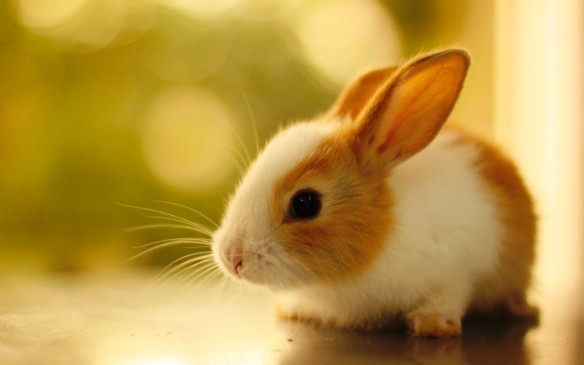 Thankfully, by that point the rabbit was probably half digested already. Otherwise, I might have had a few qualms myself.

And then afterwards, we found ourselves scarfing down blue cheese truffles from Pix Patisserie. Could the food we consumed on Saturday have been any weirder?! (For the record, they were amazing. The saltiness and creaminess of the blue cheese was offset by the sweet chocolate. The combination worked surprisingly well).

Speaking of weird food, we had family friends from Hawaii visiting a week ago, Dave and Elaine. While we were sitting around chatting, Dave asked us all, “What is the weirdest thing you ever ate?”

Great question. I could have said kangaroo, or tongue, or chocolate covered insects, or ibex. In the end, I went with alligator, though nowadays that really isn’t very exotic. Audrey has had cow testicles. Dave answered with goat brains. It was quite the stimulating dinner conversation, let me tell you.

How ’bout you? What’s the strangest food you’ve ever eaten?

10 thoughts on “The Accidental Sunset”