When did pizza places become synonymous with chicken wings? It used to be you’d call up your friendly neighborhood pizza joint (even picking up the telephone seems antiquated now) and order a pie. They might offer you breadsticks or a liter of Coke. If they were fancy, perhaps a salad. But now, everybody’s got chicken wings, too. I really don’t understand the logic behind this.

First off, pizza is Italian. And chicken wings are not. They originated in Buffalo, New York – about as far from Naples as you can get. And yet, every Tom, Dick, and Harry who sells pizza also sells chicken wings. We ordered from Domino’s last week, and couldn’t even get to the checkout screen without being bombarded by an ad for chicken. Yes, I’m QUITE SURE I don’t want to add it to my order, thank you very much. And Domino’s has taken things a step further; in addition to wings, they’ve got “specialty chicken bites” which are nothing more than gussied-up McNuggets coated in sauce and cheese.

If I’m ordering something coated in sauce and cheese from a pizza place, it’s going to be pizza.

This would be the equivalent of serving Pad Thai with pretzels. Or sushi with french fries. Or tacos with tater tots.

Only, that last one really happens. “Mexi-fries,” anyone?

Speaking of food, this weekend there are three big food-related events happening around town: The Bite of Oregon, the Clark County Fair, and the Alberta Street Fair. I’m a little annoyed that these aren’t spaced out better. We have 13 weeks of summer, and all three occur during the same weekend. It’s not even a matter of logistics so much as money. Who can afford all three? So we’ll pick one, and it’ll be The Bite because The Bite rocks. Besides, my bevy of belly-dancers is once again absent from the Alberta Street Fair, so really, what’s the point?

Audrey has fallen into quite a routine this summer. First off, she’s been taking tennis lessons, and has gotten pretty good. But those don’t start until 2 PM, so to kill time before then, she’s been watching old television series on DVD. I usually come home for lunch, so I’m able to catch an episode or two before heading back to work.

First up was The Office. Watching the escapades of Michael Scott, Dwight Schrute, and Jam (Jim and Pam – right?) in their prime made me realize just how freakin’ good that show was. Week after week, for many seasons, it delivered big laughs without fail and was one of my all-time favorite comedies. I miss seeing the gang from Dunder Mifflin.

Eventually she ran out of new old episodes, so I suggested she check out Scrubs next. She was too young to appreciate the show when it originally aired, but oh how I loved it. Zach Braff’s sitcom was side-splittingly funny, and the fantasy sequences that were a staple of the show were cleverly unique. Like The Office it grew stale the longer it dragged on, but in its prime there was nothing funnier on the air than Scrubs. 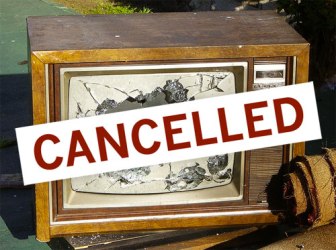 Seeing these old favorites again, I had a revelation that a cancelled TV show is like a dead friend or relative. You mourn the loss of both and grieve their passing. These are people you saw on a regular basis. You invited them into your home, and shared in their laughter. And then suddenly they’re gone, never to appear again. Except in reruns, of course, which led to another thought:

I’d expound on that thought further, but the preseason is about to begin and I’m ready for some football. Go, Broncos!