And, I can cross another name off my rock ‘n roll bucket list.

When Tara moved here in 2012 and we started going to concerts, I named three classic rock artists I wanted to see before I died: Bruce Springsteen, Bob Seger, and Tom Petty & The Heartbreakers. All were long-time favorites of mine, and their music entertained and inspired me.

In the span of a little over two years, I have now seen them all.

That, in itself, is kind of remarkable given that all three performers are well into their 60s. After all, time is finite. How long can they keep on rockin’? Bruce looked like he could easily last another decade. Then again, he is The Boss. Bob remained seated through much of the show, but that didn’t stop him from plowing through his hits with gusto. Tom was definitely more spry. From the opening chords of “So You Want To Be a Rock ‘n Roll Star” through hits like “Into The Great Wide Open,” “Refugee,” “Free Fallin’,” “Learning to Fly” and “You Wreck Me,” he brought it. The new material was pretty catchy, too. By the time he walked off the stage two hours later after the final encore – a spirited rendition of “American Girl” complete with red, white and blue stage lighting to hammer home the point – he had rekindled a rock ‘n roll love affair with the crowd. What a show! And let’s not forget The Heartbreakers, who brought great energy to back him up. Tom is humble, engaging and funny…and one hell of a story teller. It was definitely one of the better shows we have seen. And the timing was perfect: his new album, “Hypnotic Eye,” is #1 on Billboard’s Top 200 chart – and is the first #1 album of his career.

What’s cool is, the opening act wasn’t too shabby, either. Steve Winwood delivered a great set that included solo material (“Higher Love”) in addition to lots of classics from Traffic (“Dear Mr. Fantasy”), Blind Faith (“Can’t Find My Way Home”) and the Spencer Davis Group (“Gimme Some Lovin'”). After he finished, I turned to Tara and said if we left right then and there, we’d have gotten our money’s worth. It felt like we got two concerts in one.

Afterwards, we stepped out into a gentle rain as we waited for the light rail train to whisk us back to our park ‘n ride lot in north Portland. It was nice to avoid the hassle (and cost) of arena parking. Note to self: next time we see a show at the Moda Center, take light rail. We didn’t get home until after midnight, and had to get up early for work this morning, but it was totally worth the sacrifice!

Afterwards, we learned that my friend and business associate Erik had been at the show. We found this out through pictures he posted on Facebook. Here was Erik’s view of TP&TH: 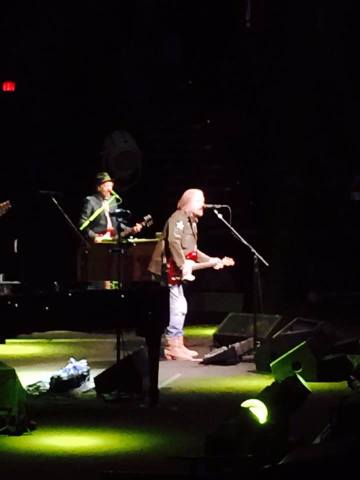 And here was our view: 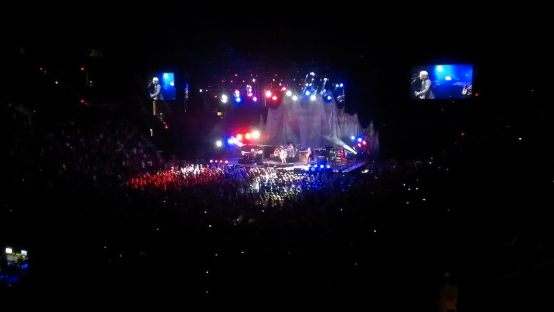 If that isn’t front row, it’s at least within spitting distance! Can’t say I’m really surprised. This is the guy who once had me over to his mansion on a hill for dinner and beverages. Great guy, that Erik, but I’ve got one thing to say to him:

Help a brother out next time.

So, who’s on your rock ‘n roll bucket list?