November 19th marks the anniversary of a pretty big day in my life. Exactly 20 years ago today – right around this very moment, as a matter of fact – I became an official resident of the Pacific Northwest.

Growing up an Air Force “brat,” I never had a home. Just a series of houses I lived in temporarily, in cities thousands of miles apart. We never stayed in one place longer than three years. My dad’s final assignment before he retired was the Bay Area of California. I actually managed to stay put for eight years in San Jose, but quite frankly, hated it there. Too many people and too much (traffic/pollution/crime/sunshine/emphasis on the tech lifestyle). The only thing keeping me there was my (now ex-) wife, who was born and raised in the Silicon Valley and whose entire family lived there. She swore she would never leave, so I would sit in my bedroom gazing longingly at pictures of Oregon (seriously) and dreaming of a better, wetter life.

And then, opportunity came knocking. The company I worked for was expanding, and decided to open a sales office in the Pacific Northwest. It would be either Seattle or Portland. And if I wanted to relocate, they would pay for my move. Oh, and promote me, too. Even throw in a nice little salary increase. What a deal, huh? I was golden. Except for the wife-who-would-never-move. And then, because:

She picked that moment to decide our two-year-old marriage no longer appealed to her. Fine, I said. I’ll date the hot girl my friends want to set me up with. And then move north and have a kick-ass job in a part of the country I used to sit around in our bedroom daydreaming about. Bitch.

The new girl WAS hot, and her parents owned a sushi restaurant. Because of those things, I:

The salmon roe sushi left much to be desired, but the impending promotion (not to mention Hot New Girl) had me feeling on top of the world. Everything in my life was suddenly falling into place just right. But not so fast. Remember how I said the Universe has a sense of humor? Suddenly, the wife decided she did want to be a Mrs., after all, and would I pleaseprettyplease with a cherry on top take her back? She told me this, incidentally, while I was in Indianapolis for a big meeting at my company’s headquarters.

Because, not to mention impeccable timing. Remember?

By this point, I had already mentally prepared myself for an exciting new chapter in my life, and was pretty much over the whole marriage thing. I decided to throw out an ultimatum. I’d take her back, I said, if she agreed to two things:

That pair of OKs completely caught me off guard. Honestly, I was not expecting her to accept those terms. Plus, I had a big date planned with Hot New Girl as soon as I got back home. If I had found salmon roe sushi even mildly appealing, my life might have turned out very differently…

…but raw salmon eggs are disgusting. And also, a promise was a promise. Which is why, 5 months later, my wife was pregnant with our first baby and we were driving north to a new life in the Pacific Northwest. Destination: Portland.

The preceding months had been filled with excitement. We spent a drizzly and cold 4th of July in Seattle, and were given a grand tour of Portland by the man who ended up being my new boss. We really weren’t familiar with either place; ironically, despite my longing to live in the PNW, I had only ever been north of the California border one time. I’m still not sure why it took on such a mythical aura. Once it was decided that Oregon would be the location for our new office, I made a solo trip back to PDX to find us a place to live. I picked out a nice apartment perched on a hill in Beaverton, a suburb of Portland. It had two bedrooms, a fireplace, and a stunning view of Mount Hood from the living room.

Friday morning – November 18, 1994 – we watched San Jose dwindle in our rearview mirrors as we drove north. Plural, because we each had our own cars to drive, making the 669-mile journey a quiet one since cell phones wouldn’t exist for years yet. We stopped briefly atop the summit of Mount Ashland just over the border, where my wife panicked momentarily because it was snowing and she had never driven in the white stuff before. I talked her down and we continued all the way to Springfield, about two hours south of Portland, where we spent the night. We had a rendezvous scheduled with the moving truck the following afternoon. 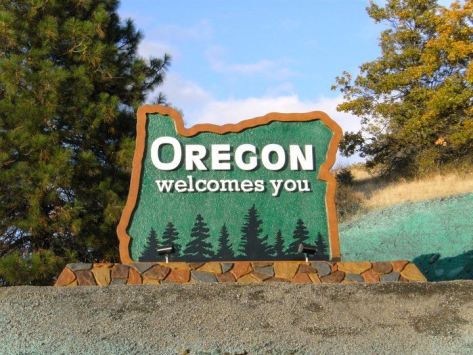 The following day – again, exactly twenty years ago – we set out mid-morning, driving through the Willamette Valley for our last leg of the trip. It was the type of day many consider “raw” – overcast, drizzly, the temperature hovering in the upper 30s. We arrived in Beaverton just in time for lunch, grabbing subs at a local sandwich shop before meeting the movers at our new apartment.

And that is how it all began.

15 months later, we bought a house just across the river in Vancouver, Washington. Different state but, imaginary lines on a map aside, it’s all really just Portland.

The wife decided once again that she didn’t much like being married – at least to me – but by then, it was a moot point. I was up here and got my babies. Obviously, I’ve never been happier. And Tara is not a fan of salmon roe sushi, either – so she’s a much better match for me.

It’s hard to believe I have lived nearly half my life here. This place is home in a way that nowhere else could ever come close to matching.

And I can’t imagine ever living anywhere else.

19 thoughts on “A Better, Wetter Life”