Last week, my company announced a holiday decorating contest. The next day when I showed up to work, one of the RM’s offices was decorated quite festively. This fueled my competitive spirit and gave me the itch to get in on the action. But with an open office layout and a desk that is in the middle of the “bullpen,” it seemed I was rather limited in what I could do. After all, how do you hang things up without walls?

By thinking outside of the box, of course.

I’m pretty sure this is a display that would make Clark W. Griswold proud. It certainly impressed the rest of the office. In a moment of inspiration last week, I remembered the pop-up canopy we bought for camping three years ago. The one that saved our weekend from the incessant rain. So I dug it out of the garage, even though I couldn’t remember exactly how big it was, and brought it to the office on Sunday, along with a bin full of unused decorations. My Content teammates, Deb and Kimberly, were in on the plan, and arrived this morning with festive decor of their own. We spent the first hour putting up our festive holiday display, and the rest of the day fielding compliments. It looks seriously good. And it’s cozy and warm. Full of so much Christmas spirit it would make the Grinch’s heart grow four sizes in one day. I don’t know if we’ll win any of the prizes, but it’ll take serious effort for someone to dethrone us.

I love my new team! We rock.

The whole company ain’t bad, but you already knew how I felt about my job. Friday was our annual holiday party. Much like the first year I started, we shut down the office and headed up to Ski Bowl for lunch and an afternoon in the snow. We broke into teams for a snowman building contest (my team’s Mario snowman did not win but still turned out pretty good) and sledding. It’s been raining like crazy in the lowlands the past two weeks, but the mountains resembled a winter wonderland. 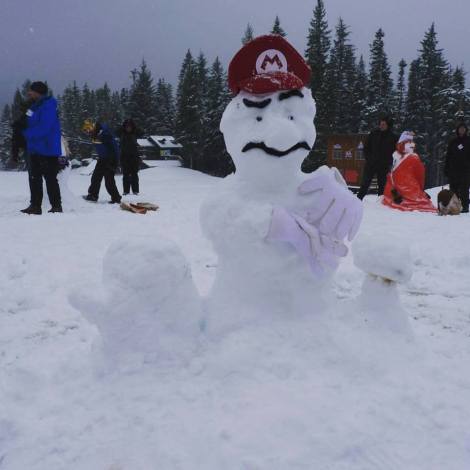 Our chartered bus whisked us back to McMenamin’s Edgefield late in the afternoon. We had the option of staying overnight for $50, with the company picking up the balance of the tab, and could not resist a deal like that. When I checked in the front desk clerk asked if I preferred the first, second, or third flood. “Whichever is the most haunted,” I replied, knowing full well this hotel has a reputation for being a hubbub of paranormal activity. To my delight, she gave me room 215 – their most popular room and also the most haunted one. When the McMenamin brothers purchased the dilapidated old property in the 1980s and began renovating the lodge, they discovered a pentagram and animal bones in 215. Creepy stuff, right? Sign me up! Tara and I did end up having an experience, too. More on that in a bit.

The party began at 6 PM. After cocktails there was a buffet dinner that included the usual fare (carved turkey and roast beef, mashed potatoes, green beans, stuffing, salad, rolls, pig intestines, wild rice risotto, just kidding about the pig intestines). I ordered a tequila soda first, but quickly realized we had a long night ahead and we could have all the beer or wine we wanted for free, so I switched to white wine and drank that the rest of the night. There was a white elephant gift exchange, followed by a hosted casino night that featured blackjack, roulette, and craps. No money was involved, of course, but we were given chips that we could cash out for tickets to be used for a raffle. Ended up having lots of fun, even though we didn’t win a prize. I had a kick dressing up for a change.

Afterwards we went down to one of the bars in the main lounge and played some pool for a while before heading back to our room.

So, we were just settling into bed for the night, when we both heard a loud whistling. Not just random – it was definitely somebody whistling a tune, and it sounded like it was coming from right there in our room. We opened the door and peered down the hall, but there was nobody else around. It was after 1 AM at this point and most people were asleep. Ghost or not, it was definitely creepy! Nothing else of note happened during the night.

The next morning we went for a dip in the heated outdoor soaking pool, then grabbed a couple of Bloody Marys each and brought them back to the room. We lounged for a bit before grabbing breakfast and checking out. We had a blast! My company has had their Christmas party here every year for the past four, and this is one tradition I hope they continue.

I wouldn’t mind ending up in room 215 again, either!