A couple of weeks ago, I came across an article that stated David Bowie had announced he would no longer be touring. And then his new album came out. Tara is a Bowie fan, so I was telling her these things, lamenting the fact that we’d never get to see him play live.

Last week, I was chatting with a coworker about his weekend. “I went hiking,” he told me. “I saw an eagle!”

This past weekend, we were talking about the recent spate of celebrity deaths with Anne. “At least Abe Vigoda is still alive!” Tara remarked.

Now, my coworkers think I’m cursing celebrities. Causing their untimely deaths just by mentioning them. I have been absolutely forbidden from speaking the name “Tom Hanks” out loud, because Deb is a huge fan and warns me she will be devastated if he kicks the bucket next.

Mum’s the word. I hope blog posts don’t count, though.

All these deaths have been sad, but the worst for me was Abe Vigoda’s. As you know, I’m a huge fan of Barney Miller. Fish was the heart and soul of the show. The Godfather ain’t bad, either. So long, Sal Tessio. Back in 2012 I blogged about Abe Vigoda and the daily status update on his website. There had been so many rumors of Abe’s untimely demise over the years, his website kept you in the loop on whether or not he was still actually alive. Morbidly fascinating. I visited the site often – most recently, a month or two ago. Sadly, this…

Was replaced with this following his passing:

Sigh. All the good ones are taken from us far too soon. Yes, I realize that Abe Vigoda was a month shy of 95 years old. Doesn’t matter. That’s still too soon, dammit!

On a lighter note, in order to take advantage of our weekend in Ocean Shores, Tara and I took last Friday off. In my absence, I was apparently on my team’s mind, because when I returned to work Monday morning they had left me a little welcome back to the office! surprise. 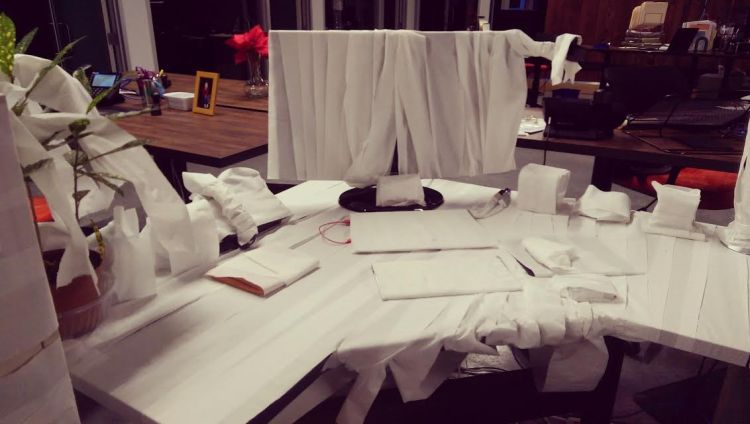 Thoughtful, huh? How nice of them to spare not just one square, but roughly 800.

Tuesday, Kimberly ended up staying home to watch her sick daughter. There are two important things to mention at this point:

You can probably guess where this is going.

Wednesday morning, when she returned to work, she began finding photos of her favorite pop idol in unexpected places. Like inside the photo frame where her daughter’s picture usually resides. The top drawer of her filing cabinet. And, probably my favorite spot of all, her telephone receiver. She only found this when her phone rang.

Best of all? She’s only discovered a few of the photos I surreptitiously placed around her workspace. Chances are, she’s still going to be finding these photos in June.

Talk about the gift that keeps on giving…