Lost in all the moving hubbub was the fact that Audrey bought her first car a few weekends ago.

Let’s just pretend I’m not old enough to have two kids with driver’s licenses and cars, okay? When I first started blogging, lo these many years ago, Audrey was still crawling around on all fours, a month away from walking. Rusty was in kindergarten and I was married to somebody else. It feels like a different life.

Anyway. Audrey had been saving up her money for months, tucking away cash from her gig at a nameless pizza, pizza joint. With a little help from her grandparents in the name of a loan, she finally had enough money to buy a car and eagerly began virtually shopping for one. She settled on a minivan – don’t ask my why – from a used car dealer in Portland, and we headed down there on a rainy Saturday morning in October.

Fortunately, she was flexible enough not to insist on the minivan, because it didn’t seem like the most reliable vehicle on the lot. For starters, it didn’t. Ha-ha. At least not at first. Took a few turns of the key, and once it got going, it idled roughly. Still, we took it for a test spin, but remained unimpressed. So we got back to the lot and the salesman – who, as far as used car salesmen go, was a pretty decent guy – found some other vehicles in her price range. She settled on a 2003 Ford Taurus that had been a fleet vehicle with two previous owners. This one seemed a much better investment. After a little light haggling, we settled on a price halfway between what both parties wanted, and 30 minutes later drove home. There was still one minor detail left, the fact that Audrey didn’t actually have a driver’s license yet, but her six-month probationary period (a Washington law for those with permits) ended in three days, so a little over 72 hours later I handed her the keys and she drove away from home, all on her own. Just like that, at the risk of sounding melodramatic, I felt one step closer to the grave. 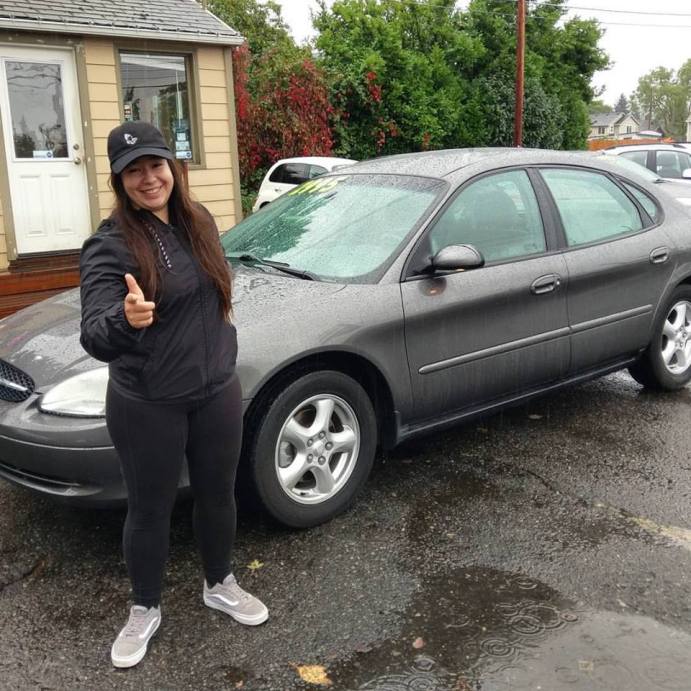 Audrey still has much to learn about cars, though. Because the next day she called Tara in a bit of a panic, informing her that her car wouldn’t start. After my wife ran through a checklist of potential problems, she figured out that Audrey didn’t have the car in PARK when turning the key.

A few days later, she was concerned because the “check engine” light came on. But the next day all was well when she informed us that it hadn’t stayed on. You know how everything on your dashboard lights up when you first turn the ignition and start the car?

Yeah. That’s all it was.

Talladega Nights she ain’t. But then again, neither am I. Which is why she’s been telling Tara about these problems rather than dear ol’ dad.

I can’t believe Halloween has come and gone already. I’d planned on dressing up for work, but the night before was costume-less and out of ideas until Tara walked through the door carrying garbage bags and a few dozen printed photos of a certain Caucasian rapper from Detroit.

“I have a great idea for a costume!” she said. “I’m dressing up as a bag of Eminems!”

I thought this was a genius idea actually, not to mention one hell of a pun, so I ended up doing the same thing. Tara helped fashion a makeshift costume, cutting armholes in the bag and affixing a bunch of the Eminem pics to it with Scotch tape. To most coworkers I’m sure I just looked like a homeless guy, but those who got the joke, loved it. I’m forever making obscure pop cultural references anyway, so this was totally up my alley. I didn’t win any of the prizes my employer handed out, but I was not in it for the glory. I just wanted to show a little holiday spirit. Mission accomplished.

Speaking of holiday spirits, that evening I had a bit of a scare.

I got home from work, turned on the fireplace, lit approximately one million candles, poured myself a glass of wine, and settled into my recliner to watch a little TV. A few minutes later, there was a loud creaking noise, and I watched in disbelief as the door to the coat closet slowly opened, all by itself, right before my astonished eyes.

“Surely this can’t be happening!” I said to myself.

But it was happening, and quit calling me Shirley. The door opened wider and wider, and my heart began racing wildly in anticipation of a face-to-face encounter with a denizen from beyond the grave.

And then the cat wandered out and looked up at me quizzically.

Sydney had apparently walked into the closet unbeknownst to me while I was fetching the candles, and I had closed the door with her in there. Oops.

Holy shit, guys. I love the paranormal and don’t often get freaked out by things of this nature, but for a few seconds I was scared out of my gourd.

Yes, that is Halloween humor. So sue me.

6 thoughts on “You Auto Know”