On my blog, anyway. In real life, not so much. We are actually headed into a “December drought,” as the media are calling it. This means no rain for the next 10-14 days, proving that the newspeople are a tad overdramatic. But that is pretty unusual for December around these parts. It’s going to be sunny, windy, and cold. In other words: boring. But, I figure next winter we are pretty much guaranteed snow where we’re headed, and possibly lots of it, so I’m not as disappointed as I might otherwise be.

Yesterday, we finally got the apartment decorated for Christmas. (Ha, I say “finally,” but we’re only a couple of days into the month. Some years, my dad didn’t put the tree up until just a few days before Christmas. That and the fact that I never had a Big Wheel proves I led a deprived childhood.)

Even though this is our 4th Christmas in the apartment, I feel like this is the first year we actually got it right. It’s a small space, as apartments tend to be, so we never really had a good spot for the tree. This time, with a little creative rearranging of the furniture, everything fits, and looks great. I even went a little more overboard with the decorations than usual (I know; shocking!). The tree is fake – we alternate between buying a real one and going artificial every year or so – and when Tara asked if we could do clear lights instead of the multicolored ones I prefer, I agreed without hesitation, which I think shocked her a little. I’m trying to be more of a yes man in my old age, I guess. And I have to admit, with red garland and a red tree topper pointy thingamajig (I have no idea what it is…clearly neither a star nor an angel, I’ll say that much), it looks pretty good. I did tell her I’ll probably be in a multicolored mood again next year, so not to get too used to this agreeableness.

I now feel like I can start listening to nonstop Christmas music and watching Elf and Rudolph and the Griswolds. I might even break out the Marty Moose Christmas Vacation glasses later. Ho to the ho, ho. 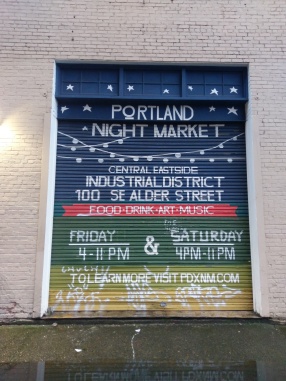 Yesterday we met up with our friend Kara, and her friend, and approximately one million other people, at the Portland Night Market. This special event is held in a warehouse 3-4 times a year and offers a great opportunity to shop for local products while enjoying an alcoholic beverage and grabbing a bite to eat. As long as you aren’t claustrophobic – because you will be elbowing your way through a sea of strangers – it’s great! We went back in May and had a blast, so we added it to our Farewell Tour list and now have one more item crossed off. It was a lot of fun, and we ended up enjoying some really good food that included a Korean fried chicken bowl, street tacos, pelmini, and miniature donuts from Pip’s (Voodoo and Blue Star hype aside, these are probably the best in the city). I doubt we’ll go again, though. The idea of dealing with those crowds is exhausting, and I’m in full-on “been there/done that” mode now.

Today we have a lunch date at a new conveyor belt sushi place in Vancouver, then we’re going to walk around Lacamas Lake for a bit. Tonight’s the “super moon” and it rises at 5:06, so we might try to get some pics of that, provided the sky clears up by then.